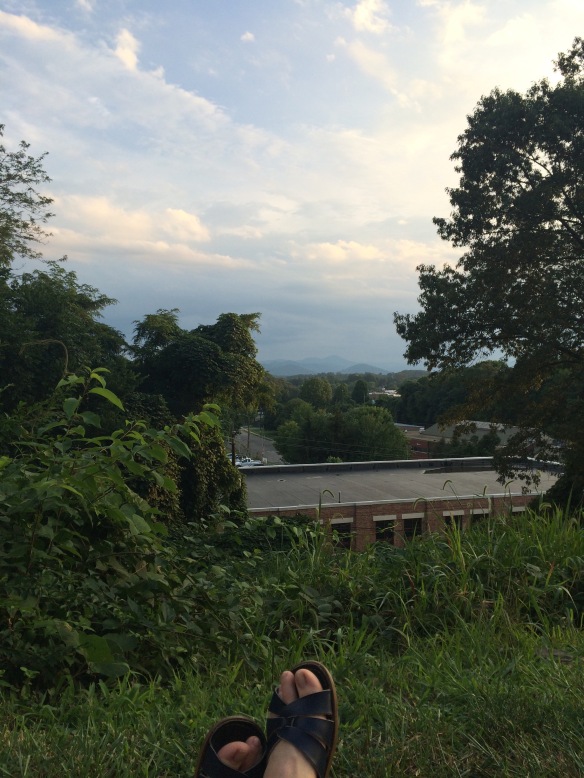 Sermon preached at DOWNTOWN CHURCH on 17 January, 2016; Eve of the Feast of the Confession of St. Peter; reading from Matthew 16:13-19

There’s this two-year-old I know who has life all figured out.

He goes on to identify the house in the drawing, “home!” and when he’s feeling very generous, he will point to the little girl in the story and admit that his sister is part of the family too.

Jack, at not-quite-two-years-old, has the world all figured out. He knows who he is and he knows his place in the larger story, what we might call “reality,” he’s got Mama and Papa and sister Anna, his home, and his toys and his bed—a place for everything and everything in its place.

Eventually he’ll grow up to learn that Mama is also a woman named “Susan,” and she didn’t really hang the moon, and honestly, she’s rather overbearing. That wasn’t covered in the picture book. That wasn’t part of the reality he’d constructed that gave Jack identity.

What happens if Mama and Papa get divorced? What if they move from that house that Jack so confidently identified as “home” when he was a toddler? Cracks start to show up in the foundation of Jack’s reality when he realizes that Mama is just Susan, Papa is just Joe, “home” isn’t necessarily as simple and safe as it seems.

We fast forward and Jack heads off to college. Home is a much more complicated place than it was when he was two, and his parents aren’t just Mama and Papa anymore; this book can’t hold the weight of the reality that’s started to press in on it. So Jack searches for other stories that can help him understand the world he’s in now, one where people betray each other, where people get sick and die, where people refuse to see Jack for who he is, and instead want to put all kinds of categories and assumptions of their own on top of him.

Jack starts to put together another story, he’s building himself a deeper, firmer foundation. As he’s exposed to the wide world of ideas, the horsepower of his own mind, and the power of relationships to forward ideas and mission at college, he finds new relationships to help him make sense of himself and the world, he might become Bob the Builder, or Jack the Architect.

Mom-Dad-Jack, as many of us may know, will continue to be a foundation in his life, whether he likes it or not—many adults are in therapy today still trying to understand the pull of those relationships. But he’s able to fashion himself a new compass, this one is built on his own life experience, his own understanding of reality, gathered from wise quotations he’s heard, important conversations he’s had, principles he’s decided to life by.

Working from this bigger, grander, more comprehensive and stronger sense of reality, Jack builds a life for himself. Maybe he gets married, he starts a business and a family. His life looks good. It looks like that picture book he read decades ago.

In quieter moments, Jack might wonder about this reality he’s set up, whether to trust the books he’s read, whether this is really as sturdy a foundation as it seems. By now, he knows that the picture book was a lot more complicated than it seemed; is the same true for his life now? Is the bottom going to fall out at some point, the curtain be drawn back to expose that the assumptions he’d built his business and his relationships on are actually just images, just mirages, a trick of the eye that doesn’t really exist?

Having your reality shaken by betrayal or by tragedy or by complicated life situations is bad enough, and it’s happened to all of us, not just Jack; but the question that plunges even deeper, that makes us shift in our chairs and turn up the stereo, that makes us stand up from the table and go get a drink of water—anything to escape the naked truth and gut-wrenching truth  of the moment—who am I?

Noting my frenetic need to keep lots of plates spinning and keep a bright smile plastered on my face, a wise friend once said to me, “Emily, sometimes you need to just let the whole cake slide and fall to the floor.”

I’m afraid of who I might be if I don’t have an impressive cake to hide behind. Who am I?

I don’t want people to see the desperate Emily, or the doubtful Emily, or the careless Emily. I’m ashamed. I’m afraid to look at those Emilys, let alone how frightened I am for others to see her, too.

In light of all these common human feelings of shame at being seen and known deeply, Jesus’ question in the gospel passage today strikes me as bold. He asks his close friend Peter, “Who do you say that I am?”

Having spent most of the Gospel together already, Peter and Jesus are pretty close; they’ve been fishing together, they’ve eaten together, they’ve gone on countless road trips—on foot—together; if anybody knows Jesus, Peter would. And as Scripture tells us, Peter knows exactly who Jesus is—not just a good guy or a great teacher or a respected prophet, but the Son of the Living God, the Savior for whom all the earth had been waiting.

Jesus is not afraid of the answer which his good friend gives, not ashamed to have a mirror put up to himself and his actions. Then Jesus does Peter one better and says, “And I tell you that you are Peter;” another translation puts it this way: “And now I’m going to tell you who you are, who you really are”—words that would have me shaking in my boots. “You are Peter, a rock”—that’s what Peter’s name means in Greek: “Rock.”

How was it that Peter found this unshakeable identity? He received the answer to the question we’re all a little afraid to ask, “Who am I?” Jesus gave Peter that answer, he gave Peter his identity, he gave Peter the firmest, deepest foundation a person could have.

It’s not a coincidence that the Bible calls God “Rock of Ages” and compares God’s strength and steadfastness to mountains. It’s not just by accident that there’s a book that helps us to identify ourselves and from which we can build our lives.

But the beginning isn’t with the book. The beginning is with Jesus. Jesus asks Peter, “who do you say that I am?” Just like Jack’s mom and dad started asking him, long before he could walk, “Who am I? Who am I?! …Mama, I’m Mama.”

I don’t know whether Peter would have been able to give his impressive answer the first time he’d met Jesus; maybe he could tell that Jesus was somebody special, but it was after spending time with Jesus, getting to know and trust him—and finally, as Jesus himself pointed out, God himself revealed the truth—that was when Peter could really answer the question, “Who do you say that I am?”

This is a pivotal point in the history of the universe; Christianity proclaims that God gives a rip about people. Since the beginning of people, whenever that was, we’ve been asking about who God is and what his name is and what exactly is going on up there and what on earth is going on down here, for that matter. In the Old Testament, Moses asks God, “When I ask all these Hebrews to follow me, who do I say sent me? Who are you? What do we call you?” God answers him in Exodus, “I Am Who I Am.” You think it’s just happenstance that Jesus uses the exact same words to pose his question to Peter as the New Testament begins?—it’s not.

Just like with Peter, just like with Moses, just like with each one of us. We do not find Jesus on our own. We cannot seek out the Living God for ourselves. God finds us. Just like God found Moses and revealed himself in the burning bush, God found Peter mending nets by the seashore; God even found Adam and Eve when they’d become ashamed of themselves, sewn up clothes and gone into hiding.

God has found each one of us this morning sitting here in our rented chairs. We’re looking for truth, we’re wondering who we are, where we belong, which story will tell us who we are and how we fit, where we can be confident and build on a foundation that will not quake underneath us or be washed away by a flood or be repossessed by a bank or be shattered by a broken relationship.

Jesus’ question is our key: Jesus asks each one of us, “Who do you say that I am?” Who have you come to know Jesus to be in your own life? What has been your own experience of his love and presence? Maybe you’ve been wounded by people who claim the name of Jesus; maybe you’re not quite sure who Jesus is after all. Maybe you know what you’re supposed to say, or how your life is supposed to look, but if you’re really honest—if you dare to drop that bright smile and those spinning plates and the facade of simplicity—you’re not sure either.

Here’s the good news. We don’t have to figure it out by ourselves. Our culture teaches us to go and grab and make and build, but Jesus teaches that he’s done all the work, all the searching, all the moving and travel that matters.

At Christmas, God answered the question “Who are you?” by coming to be a human, to rub shoulders with each one of us in the person of Jesus. Jesus himself is the foundation where we can stand and not be shaken. We can choose to believe what God says about us above of what our bad behavior or our midnight demons or our angry, short temper might say about us.

Deeper than our sin, our betrayal and our loneliness, deeper than our pride and our distraction and our selfishness, God sees our true selves. God in Jesus sees past all of that to say, “And I tell you that you are Peter… You are Emily… You are Sarah and Jordan and Kevin and Lauren…” You are a precious child of God, and upon that truth I will build my church.

Jesus knows that we are more than the sum of our sins, Jesus finds us in our darkness and brushes away the sticky pride and the thorny addiction, and he stands next to us while we look into that mirror and he tells us what he sees.

He sees a person so beautiful that she shines. Jesus sees a spirit so radiant that the darkness cannot overcome it. Jesus spit-shines each one of us to be free to reflect his own glory, to be a part of the story he’s writing, a part of that foundation where God himself will build his own church.