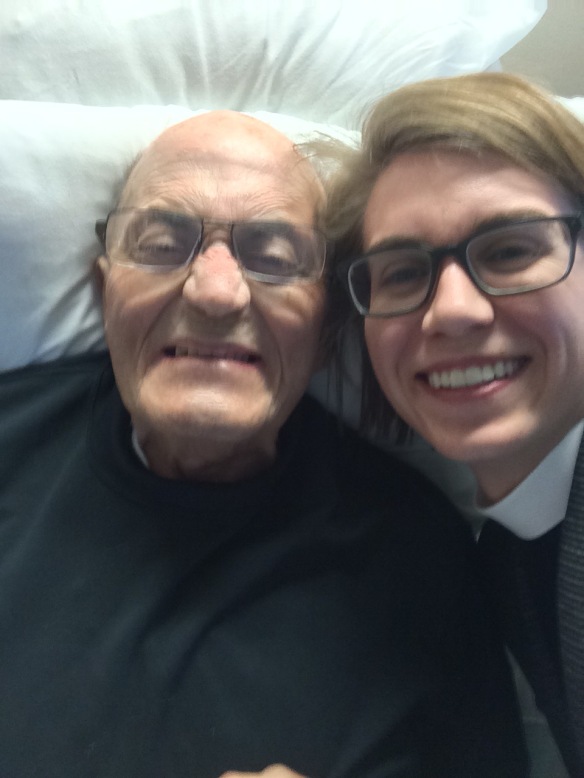 It is because of my grandfather’s death that I stand before you this morning.

During a particularly difficult moment in my ministry, my grandpa Chuck, after whom Charles is named, fell ill and breathed his last. We were living in South Carolina at the time, far from snowy Minnesota, but I still visited him a few times in his last weeks and was even there to give him last rites the day he died.

Back home, I was struggling with my call, feeling stonewalled at every turn, denied at every door, frustrated with pouring so much effort into what seemed like a bottomless chasm. It was more than exhaustion, or a period of thankless plowing through; I was suffocating, like a flame submitted to a snuffer, gasping for enough air to keep breathing. In some ways my depression felt very much like death.

From this moment of desperation, I was called North, to my sunless, windy, snowy homeland — my grandfather’s health declined in February, widely known as the darkest and coldest month of the year. Despite the weather outside, I found resurrection at his bedside and amongst my extended family there. While I floundered at home, unable to swim in the churning waters of my work and vocation there, I knew exactly what to do when I spent days in the hospice house, sitting with my grandpa and with my family.

Some cousins felt uncomfortable, “Grandpa’s eyes aren’t open, do we talk to him? Do we just talk over him? Do we just sit there in silence?” Grandma was by turns speechless and frustrated; when he still had the power of speech, he’d start talking in language that wasn’t usual for him, and she’d try to correct him. “No, Chuck, we’re not going home.” When really, I knew, he talking about a more permanent home than he’d shared with her over their almost 60 years.

“He can still hear you,” I’d tell my brother, encouraging him to say anything he wanted to, to tell Grandpa news about his sports victories, or to talk to him about shared memories, or to express gratitude. I’d rise early and drive across town before sunrise so sit with Grandpa in the quiet of dawn, hanging on each of his breaths, reading psalms to him, placing my hand on his big, bald head.

It was the time I spent with my grandpa and my family that made me remember why I’d felt called to be a priest. I really was meant for this work, even though my employment didn’t match up at the moment. That winter gave me the reassurance and strength to plod along until we were called away to new work, more life-giving work.

“Jesus, if you had been here, my brother would not have died.”

“Could not this Man, who opened the eyes of the blind, also have kept this man from dying?”

How could letting Lazarus die possibly be right thing to do? Doesn’t God hate death? Isn’t it true that death was never God’s hope or plan for humanity? I join the gathered Jews in our Gospel reading and wonder, “Could not this Man, who opened the eyes of the blind, also have kept this man from dying?” Why did Jesus let Lazarus die?

When he hears the news of this dear friend’s illness, he prophesies, “This illness does not lead to death; rather it is for God’s glory, so that the Son of God may be glorified through it.” This language is strikingly similar to last week’s Gospel passage, which precedes this story. When Jesus is asked who was at fault for the blindness of the man born without sight, he asserts “he was born blind so that God’s works might be revealed in him.” So in both cases, in these last few miracles before Jesus’s capture and crucifixion, the suffering undergone by both the victim and his family are cast as boon and blessing rather than disability and distress. But Jesus’s strange perspective isn’t done wreaking havoc on these stories yet:

Hear verses 5 and 6: “Though Jesus loved Martha and her sister and Lazarus, after having heard that Lazarus was ill, he stayed two days longer in the place where he was.”

Though Jesus loved them, he did not drop everything and go to them. Did he worry about catching the bug? Did he hope not to get underfoot? These are ridiculous considerations, of course, Jesus knew how this story would end already, so what was he up to? I wonder if we might augment a verse from earlier in John’s Gospel to illumine this confusing turn: “Jesus loved his friends so much that he let the illness do its work, so that through their suffering they might grow in maturity and faithfulness and truly self-sacrificing love.”

Yes, it is true that God never meant for his beloved creation to endure death. We were made to live forever in God’s light, in perfect harmony with each and every one of our fellow human beings and with all of God’s good creation. Unfortunately, as I suspect each one of us has found in our lives, that’s much easier said than done.

We are pulled by our own desires to frequent the fast food chain that provides something to fill our bellies in a timely manner and for very little moolah, but perhaps is not particularly nourishing, nor is the business plan of the restaurant particularly life-affirming for those who are employed there.

We are thrown by our own devices to figuratively and literally curve in on ourselves, staring at our screens, escaping our present suffering by shopping online or imagining ourselves on that pristine beach; we retreat into our own minds and experiences, with or without a smartphone to help us, ignoring the souls that sit around us, yearning for intimacy, attention, affection. We would often rather miss the demands others put on our time, thinking that passively ignoring them is less painful to us both than looking another hurting person in the eye, acknowledging their struggle, offering them the loving-kindness that you so desperately desire yourself.

It is our choices as individuals and our choices as communities that bring death to each of our doors. We choose ourselves and our wants over those who are weaker, poorer, sicker, less-respected and less-heard in our world. This self-focus — selfishness — makes us terrified of death and determined to stave off the truth of our end by distraction, medical intervention, and sheer force of will.

Into this dark mess walks Jesus, light of the world. After two more days, Jesus says to his disciples, “Let us go to Judea again.”

The disciples take a collective deep breath, give each other a nod, and clear their throats to say, “Hey man, uh, you know, the Jews are still pretty steamed about what you said last time, and uh, I’m not sure that they’ve changed their mind about stoning you yet. So, if you go to Judea again, um, they’re gonna find out where you are and then… uh, they’ll probably try to kill you. And us.”

“We must work the works of him who sent me while it is day; night is coming when no one can work. As long as I am in the world, I am the light of the world.”

The disciples relent, or they at least resign themselves, saying, “Let us also go, that we may die with him.” They intend to do right, to follow the Light of the world to the very end. Of course, we know all too well what happens in a few weeks, how Jesus is abandoned by his disciples, left alone to face condemnation and death. Now actually, the women don’t abandon him, but that’s a whole different sermon.

Here in this last scene before the march to the cross, Jesus insists that the focus be on the good work they’ve been given to do, that they would consider the light they possess and have been charged to share, rather than what might happen to the vessels of that light, should they wander into unfriendly territory.

That is to say, Jesus urges concern for the work of God’s Kingdom and the spreading of God’s light rather than the preservation of one’s own safety and self. Jesus’s urging here flies in the face of the Roman Empire and the way which tyrants throughout time wield power.

If death is the end of everything that matters, we will preserve and fight for our lives, yielding up anything that might put us in danger. The disciples struggle with this choice here in John 11 and later — indeed, disciples of Jesus struggle with this same temptation in every age. Rulers use the fear of death to manipulate their people toward their own ends, toward the glory of the ruler himself. The big question for citizens of such a state is, “For what am I willing to die?”

When Grandpa Chuck gave up his ghost on February 23rd, 2015, there was no air of desperation in the room with him. Through the whole preceding weekend, as he stopped eating, then stopped sitting up stopped talking, stopped opening his eyes, and at last, stopped breathing, I never noticed any violence or dis-ease in his manner. The nurse who attended him on Friday afternoon was surprised that Grandpa was still there when he came back for his shift on Monday morning; Chuck had seemed very close to death, and yet had made it another two days. I don’t think it was fear of dying, he seemed much at peace throughout the last days.

The image that came to my mind then and that seems most appropriate to me now in retrospect is of a life lived with hands clenched tight — holding on strong to the roller coaster of life, eager to weather whatever the path held. And so at the last, it simply took awhile for those fingers so accustomed to strength to unfurl themselves and let go. Less about staving off death and more about releasing the close-held goods of life. When people asked me about him in the weeks after, I always told them, “He had a good death.” And it was; it both showed his children and grandchildren how to die well, and at least for me, brought new life to my own vocation.

Jesus knew that his life was in twilight, that this vessel of God’s light was soon to be snuffed out. The fact did not hold him back from continuing in the work to which he’d been called; despite the mortal danger to himself, he went to his friends and mourned with them, and through his presence brought new life.

Hear the word of the Lord, the last verse of our Gospel passage today, and the verse following, not included in our lesson: “Many of the Jews therefore, who had come with Mary and had seen what Jesus did, believed in him. But some of them went to the Pharisees and told them what he had done.”