Have you ever experienced a celebrity sighting?  Until a week ago today, I hadn’t.  Last week at lunch, my brother Ross & I braved the Nor’easter and went to Momofuku.

Great minds think alike, because John Krasinski & Emily Blunt (and baby Hazel) blew in a few minutes after we arrived.  We were waiting for seats, and I was standing facing the door; a tall guy in a baseball cap with a baby carrier walked in and I thought to myself, “good god, this is a movie!  That’s John Krasinski!”  Then I mentally pinched myself and said (to myself), “This is real life!  Not a movie!  That’s really him!”

Now, he and Emily Blunt are far too square for my brother Ross to care about them much, but Young Victoria continues to be one of my favorite, favorite, favorite movies of all time–I still remember the week of my summer internship in 2010 when I watched that film on repeat.  I downloaded the soundtrack.

The soundtrack is still on my phone, 4 years later. #lovesineadoconnor

Long story short, I didn’t bother them, or say anything, and kept my eyes glued to my shoes–you know, to give them privacy–except for the photo here… just for proof.

(super-bad over the shoulder shot…)

The next day, I had a similar experience at the Met.

While wandering, I saw a religious icon across the room.  In a split second I took in the camel’s hair tunic, the wild look in the man’s eyes, and instead of even computing those attributes, my mind just said to me, “hey, John the Baptist!”  It was as if my mind and heart had skipped the sleuthing necessary for identifying characters in paintings several centuries removed from ourselves; I walked into the room, saw the “snapshot” and said to myself, “oh, my old buddy John; John the Baptist!”  Just like when I’d seen John Krasinski, movie star, and not said to myself, “Hmm, The Office… Jim Halpert… JOHN KRASINSKI!” 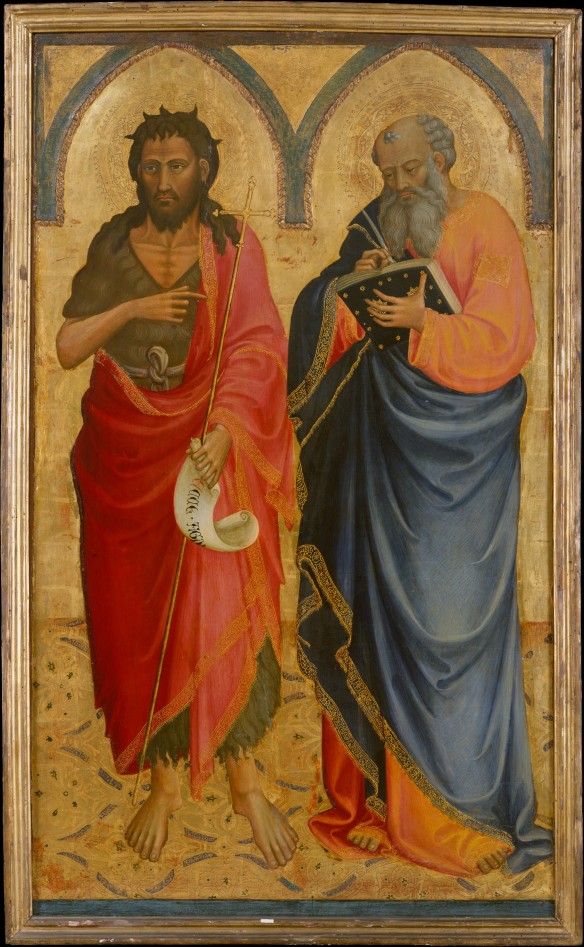 Our minds may be molded by our culture (and people.com) to recognize and be attuned to movie stars more than Bible characters these days, but it’s not impossible, or even necessarily difficult, to realign your mind to recognizing old friends amongst the communion of the saints instead.

In another room, I saw Francis (top) .  Given–there was the tell-tale brown robe, and he was kneeling with his face upturned–but again, it was like seeing a photo of a relative or the likeness of a movie star.  There was no need for the little card explaining St. Francis’ identity next to the painting; not only are there accepted ways to depict most saints of the church, but they’re so pervasive it’s almost as if museums are a veritable red carpet of church history.

Having spent a good chunk of the summer in various Gothic cathedrals, I suspect my immersion in their sculptures and paintings and stained glass contributed mightily to my comfortable recognition of these A-listers of Christianity.

When we toured these mighty buildings, my husband and I spent hours trolling the carvings and wracking our brains, putting together our masters- & Ph.D.-level specialties in the given subject matter with what our eyes were taking in.  We were kept busy doing the guesswork to identify who what depicted where and why.  I marveled at the level of familiarity with Scripture, tradition, and history that it took for us to piece together these magnificent jigsaw puzzles of the historical Christian community, and wondered how on earth any “normal” person in Medieval times would have been able to make sense of any of it.

Last week, seeing John & Emily, and then John & Francis, I realized: for people living in the Middle Ages, these characters were their sit-coms, their dramas, their stories, their world.  Sure, there was plenty of “trashy tv,” too, but if the cathedral was a Medieval amusement park (argument forthcoming!), then saints truly were the celebrities of the time; immortalized in stone and glass, their stories celebrated in the church calendar, their likeness familiar (and familial).

What if we cultivated familial attachment with our Christian brothers and sisters throughout time, as our forebears have done?  What would our prayers, lifestyles, homes, and relationships look like if we allowed the examples of the saints to truly influence us as much as we allow celebrities (or even just the popular kids at school–or in our cities or societies) to dictate our tastes, style, goals, and desires?

Who would you like to learn more about?  Mary Magdelene?  John the Baptist?  Deborah the Judge?  Moses?