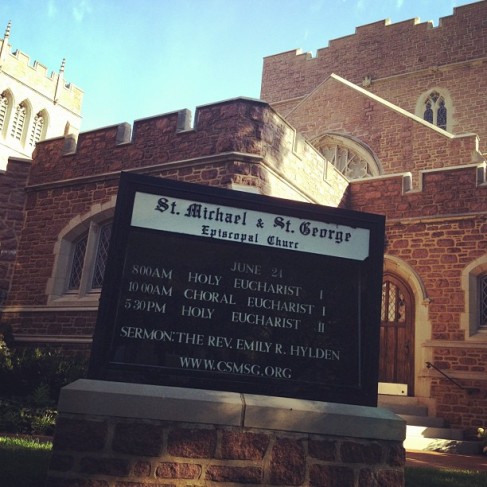 So.  We’ve got a bunch of men in a boat, in the middle of a life-threatening storm, and the main character is fast asleep—sound familiar?  This is exactly how the story of Jonah begins.  But the similarities do not end there: in both today’s Gospel lesson, and in the book of Jonah, when the main character awakes to the cries of his fellow-shipmates, he knows exactly what to do to calm the waters.  Granted—Jesus just asks for it to be done, and Jonah must be tossed into the waves—but the real difference is that Jesus finds himself on a boat in a stormy sea while he’s going about his Father’s business, and Jonah experiences the same circumstances while he’s doing exactly the opposite of what God has called him to do.

Jesus, full of faith in the goodness and the plans of his heavenly Father, relaxes while he travels with the merry group of disciples to the other side of the sea.  He’s like the rock star resting in the back of the bus while the bus driver up front deals with the harrowing traffic.  Even in the jerking stop-and-go of rolling waves, the bus driver, that is, God the Father, is worthy of complete trust and faith.  Jesus knows he is the Son of God, beloved and treasured by his Father—he has no reason to fear when the storm comes up on the sea.  His faith allows him to take a nap in the midst of the rain and wind. Because Jesus is confident of his place in God’s plan, he feels no need to worry about the conditions that surround him; being aware of the story he fits into—God’s redemption of the world—he sits back and allows himself to rest in God’s hands.

Jonah, on the other hand, is convinced that God has gone out of his mind.  The Father asks him to travel to Ninevah and proclaim God’s hope for their repentance, and Jonah turns the other way.  You see the problem here?  Jonah has deceived himself into thinking that he understands the situation at hand better than God does.  He is afraid of facing the pain that’s involved in lowering himself to proclaim the good news to dirty Gentiles. He’s developed an attitude that tells him he is more important in God’s eyes as a Hebrew and a prophet than the pagan Nineahvites could ever be.  This mindset he’s taken up is one of superiority—it’s the same sort of approach that Jesus deals with all the time from the Pharisees—this belief that as an Israelite and a prophet, Jonah is above interacting with Gentiles.  More than disdaining contact with them, Jonah judges the Ninevahites as unworthy of God’s time and compassion.

So, instead of surrendering his pride and following God’s call, he plots his own path of self-deception, telling himself that he has the choice to run away.  He makes a 180-degree course-correction and heads for Tarshish.  Then, just like Jesus, he falls asleep on the boat, but this slumber is not the sleep of faith and relaxation, it is the pulling-up-of-covers-over-one’s-head-to-avoid-the-day kind of sleep.  Jonah’s behaving exactly like Jesus—or so it appears from the outside, but he’s not acting out of faith in the miraculous story of God’s redemption of the world, he’s acting out of fear, mistrust, and self-deception.

We human beings have fragile egos.  Jonah’s self-deception here functions to placate his pride.  In our lives, self-deception is a coping mechanism and an avoidance technique.  Self-deception is when we tell ourselves something that is more palatable than the truth; a lie that makes life easier to swallow and allows us to avoid the pain that’s involved in living in the truth.  Over the course of time, whether it’s a few days in the belly of a big fish, or several years of ignoring painful broken relationships, self-deception is a life-altering process that inevitably pulls others into your sphere of self-deception.  With others involved, they, too, choose whether to join you in the lie you’re telling yourself, or they choose to face the pain you refuse to admit—either way, everyone seems to lose.

For example, In the last parish I served, there was a prominent figure in the congregation who had a very serious heart attack soon after I arrived.  He had been the acolyte trainer for decades, and he was famous for wearing kilts to church on Sundays.  This man was also active in the church’s men’s group and hosted a much-beloved cook out every summer.  After he had been shuttled between the hospital and a full-time care facility for a few months, it became clear that he would not recover; he was dying.  He never spoke about it during visits that clergy paid him, and though his wife knew the truth, she was loathe to bring it up with him.  When I was invited to the Men’s Group meeting in April, I sat in the living room with the gathered assembly, and listened to their proceedings.  One of them spoke of visiting this man in the care facility, cheerfully describing the dying man’s playful countenance and reiterating the expectation of a recovery.  There was talk of the hoped-for barbeque that summer at the man’s country house.  I left confused.  I asked the clergy about him—had he suddenly taken a turn for the better?  Would he be back to mentor another class of acolytes?

No.  He would not.  Death was imminent.  This man, enabled by those around him, was fervently avoiding death.  He was trying to deceive himself and ostensibly, out of love, those around him were allowing him to continue in the lie that he was not dying.

That community was seeking to avoid the pain of loss—he was seeking to avoid the pain of his own loss of health and life.  The repercussions of his self-deception, of his inability to face the painful truth of his deteriorating health, included, I imagine, a great shock to the men’s group when he died, and a feeling of whiplash and emptiness among the acolyte guild who were unexpectedly left without a leader.

His fear of facing pain caused the entire community to be unprepared when they suffered his loss.  I don’t know about his immediate family, but I imagine they may have been frustrated that they could not have important conversations with him about life and death near the end of his life, exactly because of his self-deception.

In refusing to face truth, we’re trying to deny change and avoid pain.  Confronting the truth of mortality, of broken relationships, of who we have allowed ourselves to become—these are the sorts of situations that make us wince, shift in our seats, and wish we could be anywhere else but where we are.  That feeling of discomfort is a symptom of forgetting the story of which we are a part.  We need God’s grace to remember his story of salvation through Christ for our sake, and the Church’s sacraments are a tangible reminder that God has given us of his story and his love.

The good news is that because of Jesus, because of God’s plan of redemption for the world through Israel and through Christ, we do not have any cause to fear pain—we have no need for self-deception to make it through our days.

God has created a larger story for us to inhabit.  It is the story that Jesus knew he was part of and found solace in through the storm at sea.  Because of Christ’s triumph over death, we are able to face pain knowing that he is with us, that we are never alone, and that we can have faith in the storms of our lives because we are called to be part of that bigger story.  We are invited to be actors in God’s play of creation and redemption.

Today we’re also given an example of a human who knew and faithfully trusted in God’s plan of redemption for Israel, and through Israel, the world.  David, young shepherd that he was, acted out of faith, and trusting in God’s power, slew Goliath the Philistine, instead of allowing himself to be crippled by fear, as most of the Israelite army was.  David’s heart was in the right place, he surrendered himself to God for use in God’s big story of redemption, not worrying about what might happen to himself.  David’s could have been a story of youthful machismo—it could have been a case of self-deception, if he had supposed himself to be more clever and more courageous than anyone else in the entire nation of Israel.  From the outside, the story looks like it could go either way, just like the different conditions that bred the stories of Jesus and Jonah on the stormy sea.

But as David approaches Goliath, he says, “I come to you in the name of the Lord of hosts, the God of the armies of Israel.”  David stood only on the confidence of God’s plan for the redemption of Israel and the world; because David knew the story was bigger than a shepherd boy and a hulking Philistine, he was able to join the work God was completing through Israel, to bring salvation to the world.

May we always remember that we stand only by God’s grace made manifest through Christ.  Our story, how we define ourselves, is found in God, not in a story that we write for ourselves.