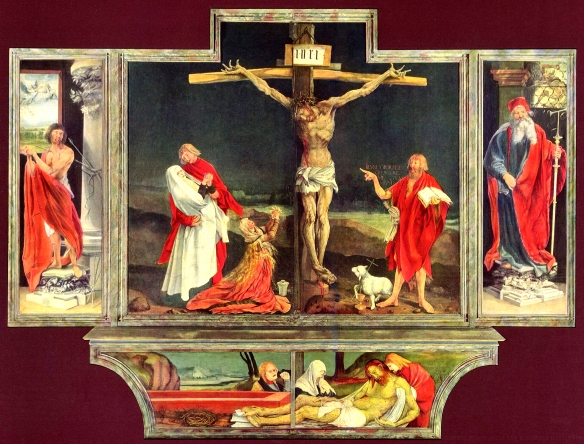 The Resurrection: In Accordance with The Scriptures (part of a sermons series with the Rev. Canon Dane Boston)

This afternoon, in continuing the series begun so brilliantly by my colleague last week as Dane preached on Jesus’ bodily resurrection, I will focus on how Jesus’ resurrection is Scriptural.

Our Nicene Creed, that pledge we say together in worship, was developed and put together by our brothers and sisters in faith hundreds of years ago.  Knowing that often someone else has already said it better, they lifted that famous phrase from Paul’s first letter to the Corinthians, chapter 15, verses 3 & 4: “For I handed on to you as of first importance what I in turn had received: that Christ died for our sins in accordance with the scriptures, 4and that he was buried, and that he was raised on the third day in accordance with the scriptures.”

Now, back in the first century, Paul couldn’t have been talking about New Testament scriptures–indeed, his letters mostly predate the Gospel accounts–so he had to mean the Scriptures which all the Jewish people had in common, what we call the Old Testament.

So how did the Old Testament predict Jesus’ resurrection?  How is it that Jesus’ resurrection is “in accordance with the Scriptures”?  His own disciples, plenty of whom were faithful Jewish synagogue attendees, didn’t have any idea that this was what was going to happen; it couldn’t have been as clear as Jesus makes it out to be.  But that’s exactly the point: Jesus makes it clear.  The person and ministry of Jesus of Nazareth, King of the Jews, fulfills the Hebrew prophecies, lives out in his work the Mosaic law, and prays through word and deed the content of the Psalms.  As our Gospel lesson from this morning attests: “Then he said to them, ‘These are my words that I spoke to you while I was still with you—that everything written about me in the law of Moses, the prophets, and the psalms must be fulfilled.’ 45Then he opened their minds to understand the scriptures, 46and he said to them, ‘Thus it is written, that the Messiah is to suffer and to rise from the dead on the third day, 47and that repentance and forgiveness of sins is to be proclaimed in his name to all nations, beginning from Jerusalem. 48You are witnesses of these things.”

So this is the direction and focus of all the Scriptures, both Hebrew and Christian: Jesus is the beginning and Jesus is the end, as is carved in our altar, the Alpha and Omega; Jesus is the final Word, the fulfillment of the word–Scripture.  What we witness on Good Friday and Easter Sunday isn’t ‘just the beginning,’ it is The End.  “It is finished” Jesus proclaims from the cross. In reading Scripture–in examining our own lives–we come to recognize that Good Friday and Easter Sunday are both vital parts of the story.  It wasn’t only the resurrection foretold ‘according to the Scriptures,’ but also the crucifixion.

This is what we see visually in my favorite piece of art, a painting which used to hang over an altar in eastern France. It’s part of a whole series of paintings that made up the altar-art in a monastery and hospital in Issenheim, a little town in the mountains.  The most famous piece of the series is the crucifixion scene, in which Jesus’ body is contorted and covered in broken thorns.  The gashes, bruises, and infections that very well would have covered him in those conditions are exposed with a stark honesty that elicits both revulsion and compassion in the viewer.  When I finally saw this altarpiece in person last summer, I sat in front of it for more than a half-hour.  It was an icon for me–I saw Jesus in a new way, I prayed with a different clarity as I sat in front of that depiction of my Savior’s suffering and death.

There are other characters in his crucifixion scene, and there’s one in particular who physically shows us what the Creed and the Apostle Paul are talking about.  John the Baptist is there, in a strange twist of the space-time continuum.  You’ll remember that the John, Jesus’ cousin, was killed rather early in Jesus’ ministry; Jesus had hardly been baptized at the Jordan before John’s head was called for on a platter by King Herod.  Grunewald, the artist, portrays John the Baptist–head attached–standing at the foot of the cross with his arm outstretched and his finger pointing to this grotesque dying body.  This is no strange affectation of an Alsacian painter, he’s showing us that John, as the last of the Old Testament prophets, and thereby a symbol of the Old Testament and Old Covenant itself, has ever only always been pointing to Jesus.

When we affirm that Jesus was raised again on the third day in accordance with the Scriptures, we align ourselves with thousands of years of history, we join the chorus of saints from time immemorial, we find our own story in Scripture as members of the people of God, hearing our Lord say to us: “Rise up, my beautiful beloved, for this is the moment which I’ve been preparing since before you were born.  The winter is past–death is defeated–the rain is over and gone; The time of singing has come–I’ve kept my promise of new life for you and for all creation–join the turtledove, the fig tree, the grapevine, all creation points toward the manifestation of my love.  Please, come, rise up and come away with me.”

1 thought on “What’s Scripture got to do with it?”