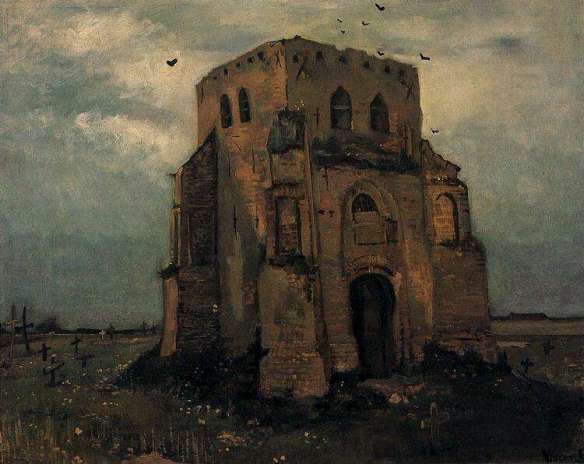 Did you know that Van Gogh almost became a pastor?  In his young life, he spent time as a missionary, and he wrote about theological issues in his many long letters with his brother, Theodore, throughout their lives.  Their father had been a Dutch-Reformed minister, but after Vincent faced numerous roadblocks and dead ends in pursuing his calling as a minister, he followed his uncle into the art world.  Many scholars argue that he “left” religion then–gave up on it–but I see a theologian at work when I look at van Gogh’s works.

This ruin of a Romanesque church (built in the 11th century) was demolished soon after Vincent finished studying it during the winter he spent with his parents in Nuenen.  van Gogh drew and painted this forlorn structure almost a dozen different ways, but this haunting depiction with its birds along the jagged roof line, lonely crosses scattered over graves on the ground, and cloudy sky, reveals to me the heart of a sad but faithful disciple.  The bits of snow (or flowers?) seem almost hopeful against the dark tones of the painting, and the work is all the more affecting for our knowledge of the subject’s imminent demise.

van Gogh lived only five years after completing this painting–indeed, he pursued art for just the last 11 years of his life.  When I look at van Gogh’s work, I can tell that he looked suffering, sin, and degeneration full in the eye.  After seeing the brokenness of the world around him, though he knew God’s hope, he struggled his whole life to cling to it.

What do you see?  Which artists help you to see God?