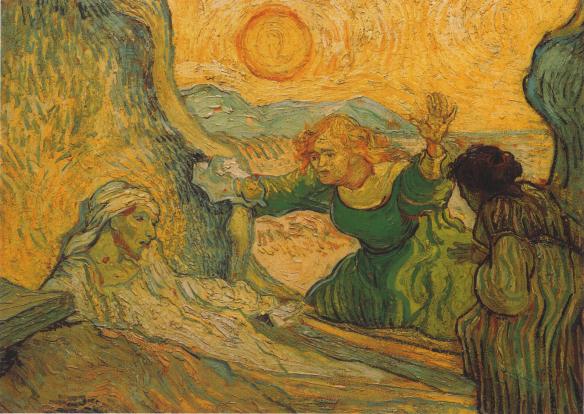 van Gogh’s The Raising of Lazarus

This sermon is offered as part of the Eastertide Sermon Series at Evensong here at Trinity, exploring facets of Jesus’ resurrection.  Today I preach on the resurrection as hopeful; using as my focus a line from the Te Deum, which was just offered by our choir: Jesus “overcame the sharpness of death.”

I want to say at the outset that “feelings” are not particularly firm ground on which to stand.  Right before dinnertime–or for me, right at the start of an email-inbox purge–feelings are often grumpy, angry, full of annoyance, while just after a meal suddenly feelings become jolly, light, content.  A cold or fever can make us feel confused, uncertain, doubtful.  All to say, our feelings aren’t particularly good markers by which to live our lives.  However: there are deeper, more abiding feelings too; I’m talking about things like gratitude, optimism, peace, or depression.

Did you know that 350 million people world-wide are affected by depression? It works out to a bit less than 7% of the population, at least in the United States, but all sorts of despairing mental illnesses abound, and it can’t be a surprise to you that ignoring this epidemic allows this evil to multiply.  Depression, or anxiety, or bi-polar disorder is crouching at the door, looking for someone to devour.  A full 30% of college students report feeling depressed, during a time of life that many remember as joyful, free, and easy.  Of those who are afflicted with this illness in the United States, 50% do not seek treatment, whether for shame, for ignorance, or perhaps for a feeling of hopelessness–which is, of course, a sign of the disease itself. (statistics found here)

What does the church offer, what does God offer, to those who have no hope?

One response is to say, “Jesus saves!  Indeed, you’re already saved! Poof! Be well!”  Surely this response is offered in sincerity, but I suspect it is also offered out of fear, and busyness, and incomprehension too.  It’s true that God has already done the work for us, that in the most important sense, there’s nothing left for us to do–God, through the person of Jesus Christ, overcame the power of death and has already opened the kingdom of heaven to all who believe. But the person suffering without hope–which could be the result of a mental illness or the result of nothing more than the hard knocks of life–that person is drowning in the stormy sea of oblivion, tossed by crashing waves that threaten at every swell to choke her.  Can you imagine saying to that person, “The waves are an illusion!  The storm is already over!  Just jump up onto the boat!”?

To not acknowledge the realness of the storm, the threat of the waves, the sinister nature of darkness is to forget that there’s really something from which God has rescued us.  God’s response to those who have no hope, those who are caught in despair and darkness, is to sit down next to them.  What did God in Jesus demonstrate but the lengthy, messy, exasperating work of hope in the three decades he spent here amongst humanity as a human body himself? God in Jesus did not say to us, “Poof! Be well!” at Christmas when he arrived, as a sort of drive-through cure.  God said, “Poof!  Be well!” at Easter, years later, when he was raised from the dead.

So here is our hope: that Jesus was raised first, so we too will be raised.  The death we will suffer here through our mortal bodies is not the final word.  By God’s grace and power, we too, just like Jesus, will be raised to immortal bodies, to perfect peace and joy, to full hope.

This past week, the church celebrated the feast day of Julian of Norwich, English mystic of the late 14th century.  In the introit sung this afternoon, authored by Dame Julian, she reveals: “In our Father, God Almighty, we have our being; in our merciful Mother we are remade and restored.  Our fragmented lives are knit together.  And by giving and yielding ourselves, through grace, to the Holy Spirit we are made whole.”

To those who have no hope, God offers the hope and promise of resurrection, being remade and restored.  God, through his bride the church, offers the knitting together of lives in community as we give and yield ourselves to God and each other.

Here in the midst of this community, we are called by God’s own voice through the Scriptures read this afternoon to:

Glorify the Lord and exalt him as much as you can,
for he surpasses even that.
When you exalt him, summon all your strength,
and do not grow weary, for you cannot praise him enough. (Sirach 43:30)

He was revealed in flesh,
vindicated in spirit,
seen by angels,
proclaimed among Gentiles,
believed in throughout the world,
taken up in glory. (1 Tim. 3:16)