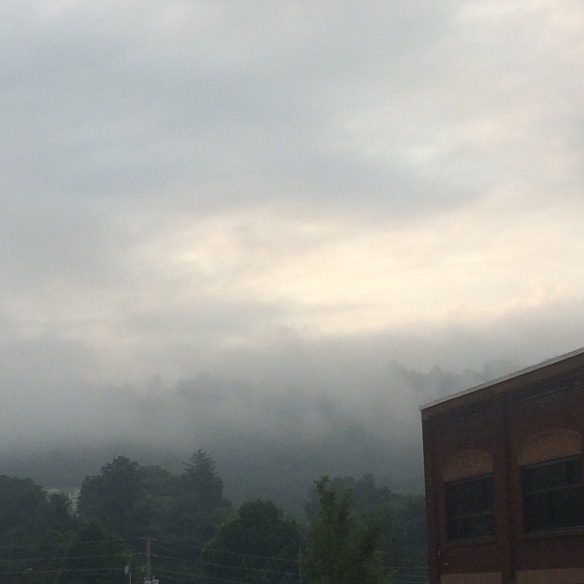 It’d hardly been an hour back to work after a three-week hiatus when the first volley came.

In Asheville, I’d spent 17 nine-hour days with complete strangers from all over the world, taking lecture notes, learning to critique and encourage each other in yoga-teaching, and breaking down barriers both physical and emotional.  After a scant month, these 25 beautiful people were a community, concerned and caring for each other, trusting and building up one another in each one’s unique purpose.  I knew that going back to “reality” would be difficult; we’d all bemoaned it.

Transitions are rough.  Whether they’re good news–new baby, a return home, vacation trip–or bad news–family death, divorce, lost job–humans struggle with change, and I knew that just as heading off to Asheville a month ago elicited trepidation in my heart, coming back to Columbia after I’d just settled into mountain life would have a bit of a jarring landing, blessed though this change was.

When the suspicious criticism started even before the first worship service last weekend, two lessons from my time away jumped back into my head: (1) how it is that white blood cells treat infections and cancer cells, and (2) how it was that Thich Nhat Hanh is attested to have treated one of his critics during the Vietnam War.

As part of our anatomy module at yoga camp, we watched a cheesy dvd about the immune and circulatory systems, viewing how white blood cells surround, attack, and bust up interlopers in the body on a microscopic level.  When the distrusting comments began, I felt defensive at first, frustrated that I didn’t have the trust that I thought I deserved. Then I remembered how disarming bear hugs of compassion could be to volatile situations; I did my best to respond to the prickly, ultimately mistaken, accusation with an all-absorbing, jelly-like hug of loving-kindness.

Having cultivated the practice—in my body and mind—of creating space (whether that is stretching my muscles to be longer, breathing deeper to wake up my rib cage, or letting go of enough thoughts to make my mind a bit more minimalist), I applied it to my defensive reaction, allowing myself not to get hackle-raised but to become a white blood cell of compassion against the bitter bacteria. Willing my loving-kindness to surround the anger, isolating and deflating it, bitterness and anger has no energy to feed off of, leaving it limp and ineffectual—unable to contaminate its environment further.

On a much grander scale, this is exactly what Thich Nhat Hanh practiced at a speaking engagement in the 1960s in the United States as he spoke about the effects of the Vietnam War on his countrymen. The story goes (told in an appendix to The Miracle of Mindfulness) that a detractor challenged his actions, accusing him of abandoning his people, betraying them by leaving for the United States instead of staying in Vietnam to suffer alongside them. He responded firmly and clearly, with conviction as well as compassion, explaining that help could only come from the root of power. If those with power were unaware of what was needed and what was happening, they could not help. He had come to the US to bring this perspective to those who could change the situation. Afterward, he left the auditorium, and bent over on the sidewalk seemed to be suffocating; his peaceful response had a significant physical toll, a private reaction that the storyteller unwittingly witnessed.

As we learn primarily from our God, the Lord Jesus Christ, peace often has physical consequences. Disciples of Jesus are called to walk the road that he trod, carrying the cross. Especially on Fridays, we consider the ways that we’re called to imitate our Lord in his sacrifice, surrounding, absorbing, suffocating, and overcoming the evil in the world with Jesus’ life-giving love.