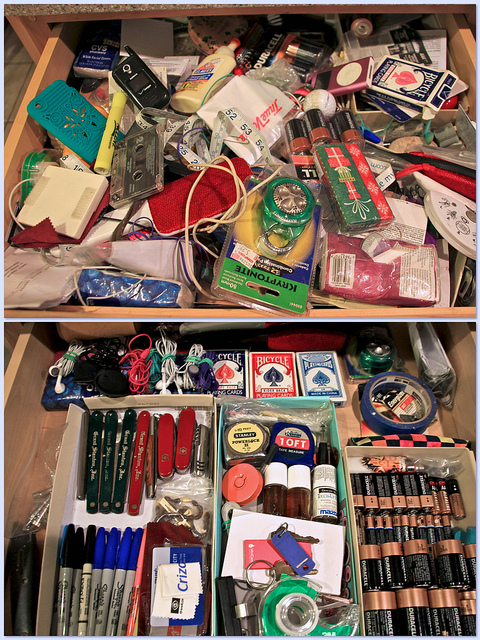 We moved almost two months ago, and while the cardboard boxes were more-or-less emptied and banished from the house within the first week (not a coincidence that we had 8 days before starting our jobs!), on both the packing end and the emptying end, I did a lot of dumping into boxes, and then shoving into drawers or closets or bins.

I realized I didn’t have to process everything at exactly the moment it was presented to me. There is simply too much to organize and make decisions about and let go of to approach the process linearly — plowing through each item intentionally on the front end, or on the back end. Marie Kondo and I differ on this point.

Instead, I processed the things that really, really needed to be dealt with immediately — the boxes of dishes and pantry staples — and surrendered a few extra drawers and some closet space (okay, an entire closet) to “stuff to be dealt with later.” If you’re a born-and-bred pack rat, this method might not work, but I’ve learned from yoga that you can deal with things as you’re ready. A moment or chance will come when the urge to organize strikes, or when you’ve got a bit of energy and are seeking some order, or when an anniversary reminds you of something more emotional or spiritual that you’re now ready to sort through.

And those chances don’t just come around once. If you’re attentive, they keep coming around. Yoga taught me that it’s okay to shove things into drawers, both physically and emotionally; it’s okay to choose not to deal with it right now and to trust that at another point, you may be ready to face what’s been put in the dark for a little while.

For whatever mystical reason, that day was today for me. Interspersed with naps (32 weeks pregnant & 100-degree heat makes for low-energy conditions), I finished my dresser drawers and organized my plans for the closet. In the intervening 8 weeks, I’ve learned more about how I use the space in this new home, so I’ve been better able to decide where to put these objects without a permanent resting place.

Maybe it’s the same in our lives, too — when we give ourselves time to process events, emotions, and relationships, we gain perspective and wisdom while we wait.