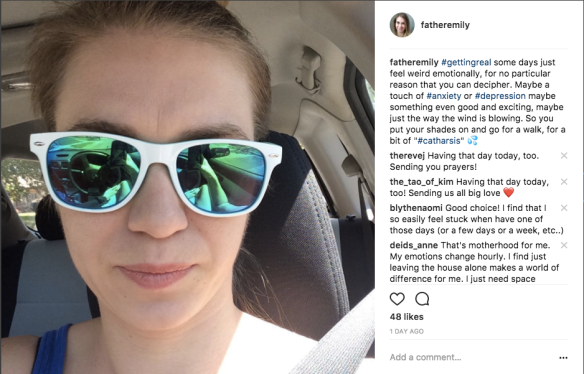 Sometimes Mondays just are this way: uncomfortable and weird, weighed down with expectations, chock-full of to-dos for the week, a crashing tidal wave of responsibility while we’re just starting up the long work-week haul.

Yesterday, I felt like I’d fallen off the surf board. Not totally engulfed, but definitely knocked off my balance and confused about which direction was shore (or which direction to go at all). It felt like that depression again, just seeping in through the patchy, disheveled shingles. “I really need to repair that roof…”

So rather than burying it through more to-dos, or through online shopping, or whatever flavor of busy-ness I could muster, I did the thing that darkness hates: I dragged into the light, and told instagram that today (yesterday) was weird. It wasn’t any kind of anniversary*, or a particularly difficult day in my relationships, or my to-do list. My heart was just not fitting well in the space it had in me, so I slowed down and looked at it. I took a walk. I wrote a bit. I talked about it.

Though it didn’t pop the bubble of veil-i-ness I felt, it did suck some air out of it; others shared they’d been feeling the same way, too — I had companions — and as I reflected, I realized I’d been able to keep putting one foot in front of the other in the midst of the psychological dreariness: I still visited a parishioner at the hospital and prayed with him, I did an errand for my dad, I went grocery shopping for my family, I gave my dog all my attention on our walk.

So when the day came to a close, I realized that the Kingdom of Heaven had shown through on that strange Monday; those who joined me in witness to a weird day, offering their own pain in companionship, and those who I was still able to serve with my body while my mind was feeling rattly. Praise God.

*It actually was a sort of anniversary, it was day 365 of working again as a priest, after my almost-year of not using my magic hands. So in retrospect, it’s understandable that this transition from the first year, the first time through, to repeating the same days again, might cause some shifting in me.