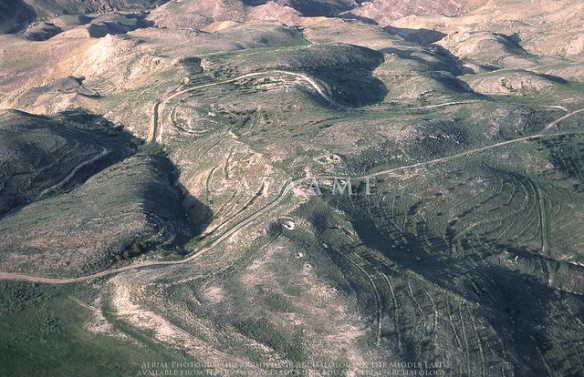 His grave isn’t marked, and he doesn’t enter the Promised Land. God had made this great covenant with the people of Israel, Moses as their prophet, leader, and lawgiver, but Moses doesn’t make it over the finish line.

First, doesn’t it seem strange that Moses’s tomb is unknown? There’s a general vicinity, “in a valley, in the land of Moab, opposite Beth-peor.” That’s like saying, “in North Texas, by a river, between Fort Worth and Dallas” — that really narrows it down. When other important people in the Old Testament die, they tell you exactly where they’re buried: in the cave at the intersection of this road and that one, or at the top of the mound when you turn left at Jericho, or under the big pile of rocks just to the West of town. Why doesn’t Moses at least get this level of respect?

Well, we’ve found already that the Israelites — and if we’re honest — we too, have a habit of making gods out of things that are totally ordinary and not worthy of our worship. There are those golden idols they made when Moses stayed up on the mountain too long, and the way they’re always complaining against God because they’re not getting their way. I suspect that of all ancestors, Moses didn’t get a plaque by his grave exactly because of what Deuteronomy tells us about him at his death: “Never since has there arisen a prophet in Israel like Moses, whom the Lord knew face to face. He was unequaled for all the signs and wonders that the Lord sent him to perform in the land of Egypt, against Pharaoh and all his servants and his entire land, and for all the mighty deeds and all the terrifying displays of power that Moses performed in the sight of all Israel.”

The people loved him, Moses was a singular guy. Moses was like that grandfather who kept the family together, like the grandmother who was always there with a cookie and a glass of milk. Good old Moses.

Which leads us to the second strange thing about Moses’s death: he left the stage before the climax! His curtain call was before the end of the story! What kind of story lets the hero die of old age before he leads the people triumphantly into the Promised Land? It’s like the greatest let down of all time. Can’t you imagine what a great picture it would be if Moses, with his trusty staff in his hand, forded the river Jordan, spread his arms wide, and declared to the people: “Here, my brothers and sisters, this is the home which God has promised you.” Then, maybe he collapses, and breathes his last, there on the banks of the Jordan. Wouldn’t that be the perfect ending? His start, being pulled out of the Nile river, his death, just crossed over the Jordan. Why didn’t God ask me how to write this history? Clearly, I could have done a better job.

But this is the story we’re stuck with: Moses dies, having seen the Promised Land, but not setting foot there. What are we to make of that?

If Moses’s burial place was known, remembered, honored, kept sacred, I wonder how the Israelites would have treated it. I suspect, being that they loved Moses so much and had trusted him so fully with their lives, they would have been liable to make a shrine out of it, to place Moses and his spirit and his memory above and beyond discerning God’s voice, continually seeking God’s face — instead, it would have been much more familiar and comfortable and just like the Israelites to side-step a relationship with God by continuing a relationship with the dead old bones of Moses. So the place where his body rested and returned to dust is forgotten to time because their very love of him was a stumbling block to their love of God and their obedience to him above all.

In exactly the same way, if Moses had been the one to get them all the way from Egypt, through the desert, to the Promised Land, it would be easy to transfer the glory and provision and fulfillment of the covenant from God, to Moses. Well, who did all those great signs? Moses, of course. And who led us out of Egypt? Moses, no doubt! And who dragged us across the Jordan into the Promised Land? Moses!  Who gave us the law? Moses! Who is our hope? Moses! Who is our deliverer? Moses! Moses! Moses!

And suddenly, it’s not God, but Moses. We know from the whole of Exodus and Deuteronomy that this is exactly what Moses was afraid of and wanted to avoid all his life — he hated the spotlight, he told God that he didn’t know how to talk, he was forever trying to shrug off the mantle that God insistently placed squarely on Moses’ shoulders. And so, through his life and through his death, both its timing and — unknown — location, Moses continues to serve God, to show by the shape of his life that God is the one worthy of glory, that God did the great signs, God led us out of Egypt, God gave us the law, God is our hope, God is our deliverer.

“Hear, O Israel, the Lord your God, the Lord is One.

And you shall love the Lord your God with all your heart,

This prayer is called the Shema. It’s part of the law that God gave to his people through Moses, recorded earlier in Deuteronomy, and it’s a prayer that faithful Jews the world-over say every single day. It’s prayer that God’s people have repeated since the time of Moses. It reminds anyone who prays it that God is the lawgiver, God is the hope of the world, God is the deliverer.

So really, it shouldn’t have surprised the Jews in Jesus’ time that the Messiah — the anointed one, the savior, the redeemer on whom they’ve been waiting — is God himself, incarnate in Jesus Christ. But of course, it does surprise the Jews, and it surprises the Gentiles — it surprises everybody. I would argue that even today, it continues to surprise us.

In the Gospel lesson, Jesus pulls out this most ancient, most revered of laws when he’s asked which command is the greatest. Jesus points to Moses in choosing this passage, appealing to the most venerable prophet, the greatest forefather. This prayer is part of the law that God gave to Moses on Mount Sinai, part of the Word that God spoke through Moses to his people when they were just starting on their desert sojourn. These words are the ones that form the foundation of the Israelites’ relationship with their God, Yahweh. Jesus uses them now to show those who question him that he, too, follows the law, he too, is part of the Israelite people, he too, comes from the lineage of Abraham.

God in Jesus takes it one step further than anybody imagined. Not only is the Messiah, the anointed one, the deliverer, to be of the lineage of Abraham, and not only is the redeemer and savior to be a son of David, not only is the ultimate ruler and lawgiver and prophet to be the king of the Israelites, but this person is God, too. Abraham couldn’t have seen this coming when God promised him that his descendents would be as numerous as the stars. Moses couldn’t have imagined that this was what God meant when he said that God himself would provide a leader for the people after Moses died. As the prophets Elijah and Elisha and Jeremiah and Isaiah and Hosea all gave voice to God’s promise of redemption and of deliverance and of grace and peace and renewal, they had no clue that what God meant was that he himself was coming to be with us.

So in the end, the death of Moses is less about the injustice of him never stepping foot in the Promised Land, it is less about him being robbed of the honor he deserved, it is less about the loss of this great galvanizing leader of the Israelites, and it is more about Moses’ whole life being oriented toward God’s mission to bring his people to the land flowing with milk and honey, more about God being honored and revealed in the shape of a human life, about God providing the strength for leading and the wisdom for fulfilling a call. It is all about God, who we have come to know in Jesus Christ, being the leader and lawgiver, the focus and fulfillment, the beginning and the end, of our lives.

We learn from Moses and from Jesus this morning that it is not up to us. We are never the savior or the redeemer or the deliver, even great old prophet Moses never was. Even our Mommas who seemed to hold our families together, even our grandfathers who taught us responsibility and hard work and the value of a dollar — it has never been up to them, it has never been up to us. We can’t make it on our own, we are not our only hope, we are not the authors of our own fate or the makers of our dreams.

Moses knew, and King David, author of the psalm that Jesus quotes his questioners knew, that God is always our only hope, and even better than Moses knew and even better than King David could imagine, God did not save us from afar, God did not send an emissary to accomplish his purpose, God did not snap his fingers and let somebody else do the dirty work. God himself came in Jesus to save us, to transform us, to bring us to new life, all for the sake of his great, precious love of each and every human life.