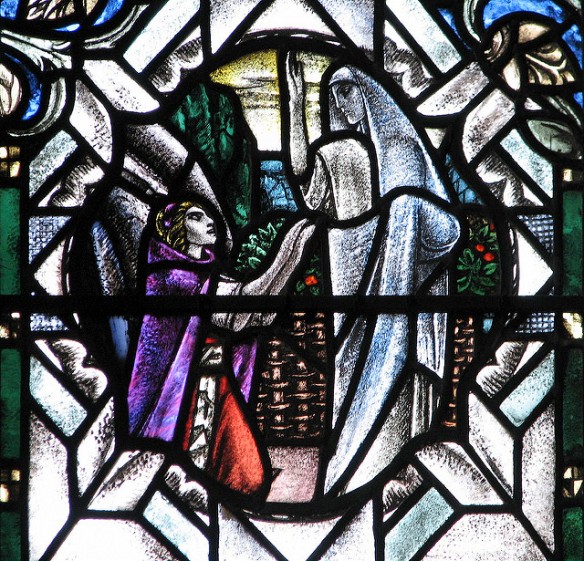 I don’t need to give y’all a history lesson; you know full-well that in the ancient world, women’s words weren’t worth the breath used to speak them.

Even in our own country, women were only granted the right to vote less than 100 years ago. My own great-grandmother, after whom I’m named and who I grew up spending time with, was born before women were allowed to vote in this country.

The worth of women’s words has been a significant topic of discussion in our own society over the last year or two; the question of believing women’s testimony is still a live wire, where the norm continues to be that men, especially men who look a certain way, and possess a certain education, and boast certain successes, are the really reliable ones. People who have skin of a different hue, people who are not from the right part of town, people who do not know the right networks and social-media-optimized words — they are not reliable in their testimony. The world tells us that we ought not listen to them, what they have to say isn’t worth our while, it won’t help us or forward our own aims, it isn’t true.

The Gospel accounts, these four books proliferated in Scripture, come from very different angles; one is believed to have been an educated Jewish man, one was written down less than 20 years after the events described, while another was probably composed more than 50 years later, another was most likely written by a non-Jew, a Gentile, who might have even been a doctor. Given the divergence of these accounts, they agree on a startling number of points, the one which captures our interest this morning is that a woman was the first person to witness and to testify to Jesus’s resurrection. All four writers, from different decades and different people groups, with different priorities in their storytelling and different ways of communicating their truth, all chose to include this detail: early on the first day of the week, a woman went to the tomb and found it empty.

How did God decide to reveal himself to humanity? God chose to be born, to be given his skin and flesh from a woman’s body, to be taught at home by his mother and his father, not to have impressive pedigreed education, to travel by foot throughout the rural countryside in the Middle East, counting women among his traveling companions. When Jesus was betrayed for his rabble-rousing to the governmental authorities, all his male companions left him. Even those who said they would surely die beside him, when the moment of truth came, they saved their own skins by falsehoods. The testimony of the men around Jesus, the trustworthy ones, failed.

To be fair, Mary Magdalene herself didn’t quite understand what she saw and experienced. Wracked with grief, she wandered to the tomb while it was still dark; it’s easy to imagine that she was suffering insomnia, bereft of her beloved teacher, the one who saw her as a person, as a precious creature, not just a body to harbor new life or a machine to produce food and mend garments, but a spirit and soul worthy of love and of cherishing. What would the world look like without their leader, Jesus? What would become of the work that he had done? How could they go on now that he was dead? I imagine her hope was threatened, her soul troubled with insecurity. This new kingdom Jesus had described; how could it continue if its king was dead and gone?

Wandering in this state of deep mourning, Jesus and the angels had to ask her three times before she understood and recognized that Jesus was no longer dead. But this was no April fool that he played, as she reached for him, to literally cling to the truth that she saw, Jesus told her, and Jesus tells us, “I have not just ‘come back’ from the dead. This is not a resuscitation. This is resurrection. I have come through death, God the Father has brought me out the other side.”

“Do not cling to me,” Jesus tells Mary Magdalene; “things are not as they were. This wasn’t just a bad dream from which you’ve awoken and which you can just forget and move on. Things will never be the same again. A real change has taken place. God our Father has overcome sin, death, and the devil, and he’s done it through flesh and blood, he’s made the new kingdom to be here and now. The old world, where women are not believed, where the poor get short shrift, where there are slaves and masters, where there are abusers and the abused, where there are addictions and pride and cancer and fear — this old world is dying. I AM alive. I AM the first sign and I AM the promise of this new way of life, this new reality that is taking over. I AM here and now. I AM the future. Mary — go and tell our brothers and sisters this Good News.”

This is the Christian story and the Christian truth, my brothers and sisters: that the God of Abraham, Isaac, and Jacob creates not out of jealousy or accident, not out of manipulation or fear, not out of war or ambition; the God of Abraham, Isaac, and Jacob creates his precious people, each and every human being ever conceived, he creates them out of his great love. This God loves his creation, his people, every human, so much that he could not stay away, he could not remain in an intangible, spiritual world, but wanted desperately to touch us, to place his hand on our hearts, to feed us nourishing food from his very body, to walk next to us through each dark valley and each sunny glade. But for God, even companionship was not enough. God in Jesus, this divine man, could not bear to let evil have even a foothold in our hearts and in our lives. So more than walking with us through the dark valley, when death knocked on each of our doors, Jesus Christ himself insisted that he answer the call, that he go through eternal death in our place, that he face the worst that evil has to offer, that he risk his life, his eternity, rather than we losing our souls to darkness, to greed and oppression, to despair and to annihilation.

This morning, like every Sunday morning, every seven days, year in and year out, God’s people get together to tell this story again, to be nourished by God’s own hand, to let God speak into our hearts, to remember that the reality deeper than oppression and despair and injustice is that God in Jesus Christ has crowned a new king, has created a new kingdom, has broken the power that evil has over this world and over the lives of each and every one of us.

But don’t take my word for it; only a fool would believe a woman’s testimony.