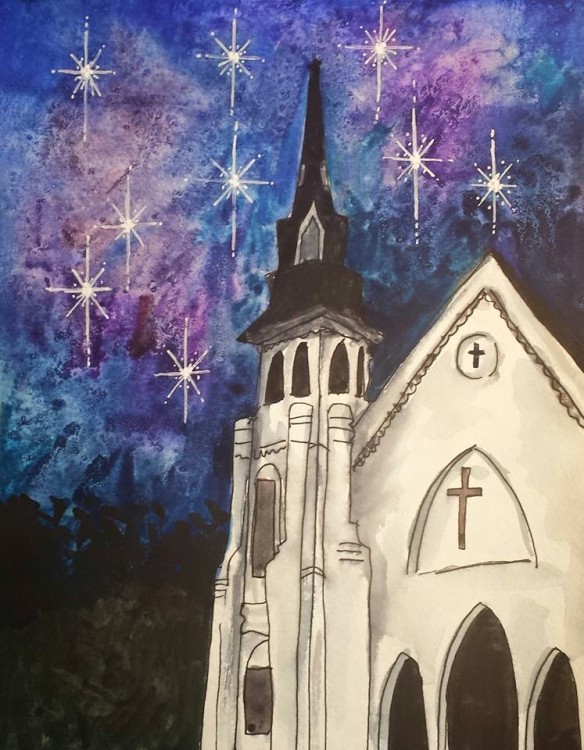 three sermons that are worth chewing on this week:

In the face of Emmanuel AME Church, Naming Goliath (2)

“Last week in Charleston, however, was different. To be sure, it’s important not to romanticize or idealize the black church, or any church. All Christian groups are riven by Sin just like all other groups. But the black churches have suffered so extremely, and so unjustly, for so long, that they have achieved a maturity that seems almost superhuman.” “What’s in those lamps?” (3)

Advent, the four weeks leading up to Christmas, are a time of expectation.  I learned this firsthand when I spent a summer interning at a church whose pastor’s wife (a pastor herself) was due to have a baby boy in the middle of July.  We watched our cell phones, we asked the mother how she was feeling, we hovered.

END_OF_DOCUMENT_TOKEN_TO_BE_REPLACED

If you had to–what would you say are the two most-widely-memorized passages of Scripture?  Reading Psalm 23 this week, in preparation for a funeral, I was struck at the similar themes in the psalm and in the Lord’s Prayer…

The Lord’s Prayer asks us to repeat that we hope for God’s will to be done here on earth as it is in heaven, to affirm in faith that God will lead us away from temptation, and to declare that the kingdom–all creation–belongs to God (to, in a way, assert that God is everywhere, as he is witness to everything, all the time, in the universe–the buck stops with him).

Psalm 23 tells us that God is our constant companion–our leader as we pass by verdant fields and flowing water, the one standing next to us in the valley, the one sitting nearby when we face enemies.

So, if these are the two most-easily-found scraps that provide us with clues to God’s identity, and we see in them that God says he will always be near us, he will be our all-time companion, what do we see to corroborate this in Scripture?

Abraham – leaves all he’s ever known, he’s alone in a strange land with his wife—in his travels he’s afraid more than once that he’ll be killed, but he trusts God and God continues to be present and God blesses Abraham’s family.

David – youngest, smallest son, the stinky shepherd, but he trusts God and God is present with him and blesses him.

Jesus  – is God’s ultimate presence with us.  God himself came to live with humanity, because of his love for us.

Marriage is meant to be a symbol of Jesus’ presence with us, his church.  We vow to be present, to be a companion, to one particular person for our entire lives.  We can’t make it easier, or take over someone else’s life, but we promise to be next to them in facing both sorrow and joy.

Children also teach us about God’s presence.  We get a glimpse of the love God has for us in the love we feel for our children, we see how dependent we are on God when we experience the dependence our children have on us.

We cannot protect our children from all sadness and all harm, but we do our best to be present with them, to walk alongside them as they—and we—endure whatever suffering befalls them.

We are God’s children, and through Jesus Christ, his own son who he gave up for our sake, God himself is present to us, today, and forever.  Amen.

(inspired by reflections on a recent funeral)

(silence/staring right back at the congregation for 10 seconds)

Ten seconds of silence.  But how long did the wait seem to you?  And how did it feel to sit through it?  Did you start to wonder if something was wrong?  Perhaps I realized that my notes weren’t on the pulpit, or maybe I suddenly felt ill, or got stage fright after doing this without too much trouble the last few months.  After a few seconds—how quickly our minds move from one line of thought to the next!—you lost interest in this strange, quiet woman standing in front of you and moved on to planning your grocery list or trying to recall which doctors’ appointments were this week, or whether you’d written that Christmas card already.

Last week, picking up a friend from the airport, I wondered, as I often do in that situation, what we did before we had cell phones.  I have never picked someone up from the airport without a cell phone to aid me in timing my car’s arrival.  I vaguely recall being with my mother, driving around and around in circles, searching for our guest, or even further back in my memory, being allowed to idle in our car by the baggage claim curb.  Our technology has eliminated our need to really sit and wait for someone—three-year-olds who are being potty-trained, excepted.  Even in such a situation when we happen to be sitting in a restaurant, waiting for our lunch companion, or standing outside a theater, waiting for our date to park the car, we pull out our phones and check to see whether we might be more interested in what’s happening somewhere else—a sports game or a war in the East or, until a few weeks ago, the newest political gaff.

At a party a few weeks ago, six or ten of us sat around a coffee table, waiting for the guest of honor to arrive.  Almost instinctively, many of us pulled out our phones and then glanced down to occupy us while we waited.  Immediately, Rob Lehman roared at us—I don’t know if you’ve ever had a red-haired man over six feet tall roar at you, but it’s something fearsome to behold, and let me tell you, it makes you listen!  He said, “What are you doing?!  Be here!  Be present!  Put those things away!”

This (evening/morning), Jeremiah doesn’t have to say that to the people he’s addressing.  They’ve got nothing to put away, they’ve got nothing to occupy their minds or mouths—many of the people Jeremiah’s talking to have lost their homes and their land and their livelihoods.  They’ve been carried off into exile—and I imagine they’re remembering, with a lump in their throats, the stories their ancestors had told them about another exile, centuries spent in Egypt.  Perhaps they had that feeling of foreboding that they had pushed the envelope (?) just a little too far.  They’d meant only to get to the brink of disaster, and then pull themselves back before the real consequences set in.  Then they lost their balance, and mighty Babylon came in and erased their lives from the face of the earth, sweeping the people along back to Babylon.

These people sat in their shantytowns, figuratively listening to Jeremiah on the radio.  He told them that God hadn’t forgotten them, and far from being abandoned, God would still fulfill his promise to them, saving them from their distress and bringing them to a safe and secure existence again.  What a relief!  Imagine the pit in their stomachs shriveling up, their breath coming a little easier, their shoulders drooping a little as the stress of the unknown left their bodies.

But then, they looked around, and remembered that they were still stuck in Babylon for God-knows-how-long.  The severity of the situation caused them to redouble their resolve, knowing that it probably would not be within their own lifetime that God’s promise would be fulfilled.  Still, God had promised to deliver them, and again—just like in Egypt, he had made good on his promises before.

What were their options, anyway?  There was no food in the storehouse to fall back on; there were few family or communal networks intact to provide support.  God was their only fallback, God was their only support.  They had no personal property to distract them from the waiting, nor had they prosperous, rewarding occupations, as they may have had in Israel.  All possible diversions had been stripped away—it was just the people, sitting in a foreign land with few comforts, staring into the heavens, waiting for God.

How strange they must have seemed in the midst of this thriving, bustling world capital, those rural Israelites who thought that their God was more powerful than Babylon.  Didn’t they know that they Babylonians’ ancestors had almost built a tower to Heaven?  These people they now lived with were truly the most impressive people on earth.

Believing in and waiting on God’s promises looks strange, especially in lands which boast much of the world’s power.  It’s weird to get up at 5 a.m. on Sunday mornings and drive to a shady part of town to make toast and drink coffee with people who don’t look like you do.  It’s puzzling why kids would fill shoeboxes with gifts they’d really love to see under their own Christmas tree and ship them off to other continents.  It’s strange for busy moms to leave their families on a school night and make a Christmas meal together to give to another set of moms who happen to be in their teens.

This first Sunday of Advent marks a change in time for us Christians.  It the Church’s new year, and it’s no coincidence that our first season in it is a season of waiting.  Like the Season after Pentecost, which we just left, and like Christmas and Epiphany, which are coming up, Advent encourages us to focus on a particular aspect of our lives as Jesus’ disciples.

Waiting on Jesus looks strange in our culture, but it’s absolutely necessary for us if we want to grow as disciples.  We take advantage of the story that God gave us of Mary and Joseph and the Israelites waiting for Jesus to model our own waiting on him.  For myself, I struggle with waiting—not only the kind we’ve been talking about this morning, distracting ourselves so that we forget that we’re waiting at all, but the kind when you jump the gun.  Fr. Jed is a great bread maker—he’s got his monastery cookbook, and he churns out artisan loaves with flair.  Your Mtr. Emily is not a great bread baker.  I can never tell when I’ve waited long enough on the yeast, and for some reason, there are always phantom drafts in my kitchen that do not make it a friendly environment for the growth of yeast.  My breads end up low, and often tough—I am not at all gifted in judging the readiness of yeast, and I go on strike against yeast every few months, and the jar of it languishes in my fridge.  I think we’re often like this about Advent.  We’re not good at waiting, so we give up and give into the busyness and the distraction.  But Jesus, and Advent, are always there waiting for us—they haven’t given up on us, so why don’t we give the waiting another try?