Ian Cron puts so many things so well; here, exactly why I wandered into a Roman Catholic Church seven years ago:

“Much of the liturgy for the mass, filled with its formularies, prayers, and creeds, is well over a thousand years old. I was moved that people were offering up the same words, giving expression to the same truths in different languages and time zones all around the globe that very day. Some were singing the liturgy in grand cathedrals in Europe, and some under a lush canopy of trees in Africa. Some were performing the liturgy in secret house churches in China, and others in prison chapels. Where or how it was said it didn’t matter. Solidarity mattered.

As I pondered the faces of saints captured in stained glass, the frescoes that adorned the walls and ceilings of the nave and apse, it dawned on me that the liturgy was connecting me to a long and ancient line of believers.  Time had become irrelevant.  We were one chorus, one communion of saints.  I was but one soul in the long procession of the faithful that wound its way down and along the hilly landscape of history.  I was appropriately small.”
– Chasing Francis, pg 90

A St. Francis situation has developed at my house recently.  For three years, I’ve owned an imposing and sweet German Shepherd named Benedict (yes, after the last pope–but the joke doesn’t end there).  About two weeks ago, an adolescent kitten, black with a white belly and feet, started showing up on our front porch; the dear thing was rather malnourished, and suddenly our old neighbor’s words rang in my head: before he moved a month ago, he told us about a black outdoor kitten he’d just had neutered, who he hadn’t seen for a few days.  This hungry little animal must be the same one. 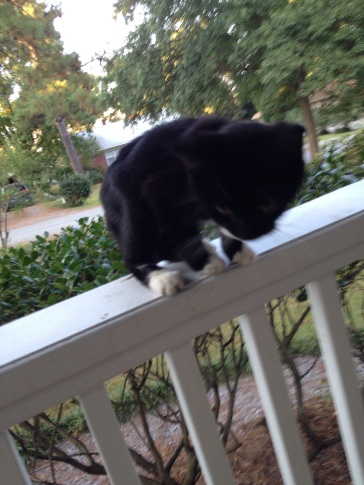 We started feeding the dear cat, I named him Francis, after the current pope, and we embarked on a journey of tending two pets who couldn’t be trusted together.  I’m not sure what it means for the future of the Roman Catholic Church that the two most recent popes namesakes’ cannot exist in the same space together in our home, but my allegation that we Hyldens have a St. Francis situation on our hands isn’t about animals so much as it is about living together.

You see, St. Francis is famous for his devotion to animals.  He’s almost always depicted with a bird or other critter, and many of the apocryphal stories about his life and miracles include animals as main characters and beneficiaries of his witness.  Indeed, in our courtyard here, just outside the doors of the chapel, we have a St. Francis statue, surrounded by cement fauna.  This obsession with St. Francis and animals misses the point, though.  Francis started a holy order for men, the Franciscans, as well as a companion order for women, called the Poor Clares; he was a great preacher, teacher, and missionary; it is even said that he received the stigmata, that is, the marks of Christ’s suffering on his own body, during a vision near the end of his life.  Francis’ association with animals is less about the animals themselves, though he clearly cared deeply for all of creation, and more about what his devotion communicated about God.

My dog, Ben, has white-and-black Shepherd markings, not the black-and-tan you most often see on that breed.  This coloring makes lots of people who see him joke, “and what percentage of wolf does he have in him?”  To those who don’t really know him, he looks frightening–and that’s why I got him in the first place–but we have hope that he and Francis can grow to be friends because we know that he is a sweet, soft-hearted dog.

In a similar-but-opposite way, St. Francis looks docile and perhaps even ineffective in his sweet pastoral scenes surrounded by animals, but in reality, he is revered by many as the most Christ-like of any saint in our church’s history.  To associate him only with animals is to ignore the heart of who Francis was and what his example offers to us.  He was converted by a sermon he heard on Matthew 10:7-10, which states, “‘And as you go, preach, saying ‘The kingdom of heaven is at hand.’  Heal the sick, cleanse the lepers, raise the dead, cast out demons. Freely you have received, freely give.  Provide neither gold nor silver no copper in your money belts, nor bag for your journey, nor two tunics, nor sandals, nor staffs; for a worker is worthy of his food.'”  He understood Jesus’ charge to his disciples as aimed at all Jesus’ disciples throughout time and space, even to Francis himself, even, perhaps, to us today.  Francis took this command to heart, and traveled, preaching and teaching his whole life by both word and example.  He told anyone who would listen about the way that God had taken charge and changed his own life, he preached to people who didn’t listen.  Francis preached to everyone, all the time.  Francis even preached to animals.  He was rabid in his proclamation of the gospel to every person and thing that crossed his path.

Francis and his animals aren’t so much about animals needing God’s blessing, but about the charge which we receive, which Francis also received and responded to, which is to preach the Gospel all the time, to everyone, everywhere.  God, in Jesus Christ, came to live with humans so that we might know God’s love in the most personal way; we are witnesses to this love.  Dear friends of mine started the Community of the Franciscan Way in Durham, North Carolina; those with jobs who live in the house provide food, shelter, and companionship to people who have no other place to stay.  Those with no other place to stay are not required to live by the rule of life followed by the others living in the community, nor are they compelled to stay any longer than they wish.  The point is to live in complicated relationships, not trying to change others (but perhaps praying that you yourself would be changed).  May we follow the example of Francis, becoming so famous for our incessant preaching of the living God, that we, too, are forever remembered for talking so much that we talked to animals.