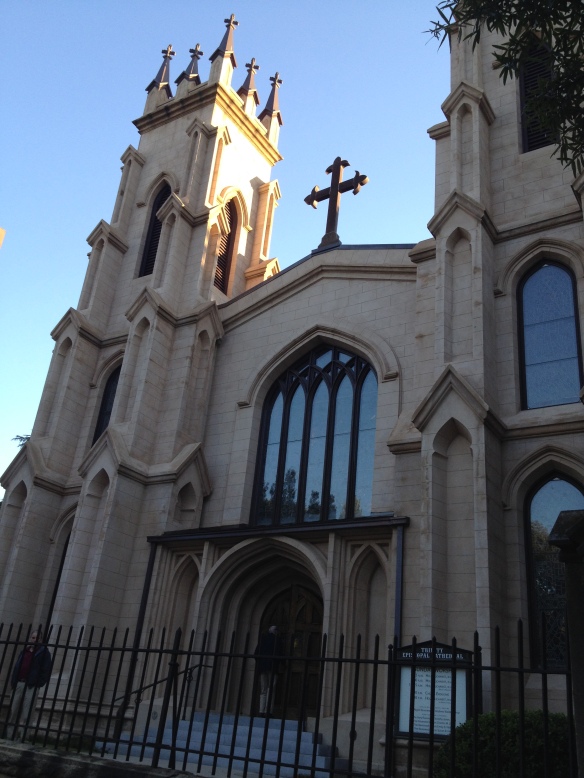 It almost seems as if I’ve skipped the sermon, doesn’t it?  Breezed over the Creed, the Prayers and the Confession, stolen the celebrant’s line, and moved right on to the offertory.

Isn’t that what sometimes happens in October?  We hear about “stewardship” from the pulpit, from our Bible studies and Sunday School classes, from the mailers that show up at our houses.  Soon we’ll have pledge Sunday, and our pledge cards will be brought up during the time of the offering; we’ve had weeks full of witnesses come up to share their stewardship testimonies in the past.  Many people avoid church all together in October and November, and though I suspect that the Gamecocks have something to do with it, I’ll wager it’s not the only reason.

That verse comes from Psalm 50; a psalm that reveals to us who God is and reinforces the picture of God offered at Isaiah’s hand from our reading this morning.  This migrant prophet, living with Israelites in exile, says some really amazing things about the God of Jacob.  Can you imagine what this sounded like?  Did it shock you this morning?  Look again at the passage:

“Thus says the Lord to His anointed, to Cyrus whose right hand I have held”

“anointed” means Messiah.  Isaiah talks of a foreign warrior king, Cyrus the Great, as a savior for the Hebrew people, chosen by God himself.

“whose right hand I have held” – what does this mean, but what is expounded later in the passage, that God has led this Persian conqueror to victory.  God is taking credit for the success of a pagan military man, and is even claiming to be his God.

It’s uncomfortable enough in our day and time to say to someone who professes another faith, “my God is your God too,” but in ancient days, gods very much belonged to their own people, to the culture out of which they came.  Gods had an even stronger sense of cultural belonging than they do today.  In the United States and elsewhere, people are a mishmash—Jews living alongside Sikhs next to Muslims and Buddhists—in Isaiah and Cyrus’ times, gods were tied to your Greek or Roman or Persian or Hebrew identity.

God puts in Isaiah’s mouth the truth that the Hebrew God is the only one, as verse 5 tells us: “I am the LORD and there is no other; There is no God besides Me.”  What an audacious claim—especially being made of someone who is captive to another country, exiled!  The Israelite people are living by the good grace of foreign kings, some of whom demand renunciation of the Israelite God in favor of the local deity.

Isaiah doesn’t stop at saying that the Israelite God is the only true, living God; he goes on to claim Cyrus’ success for this God of Jacob.  In verse 4, he says, “For Jacob my servant’s sake, and Israel my elect, I have even called you by your name;” all that God is doing, even in the midst of Israel’s exile, even the movement of foreign kings, is all under God’s direction—everything belongs to God.

In these short 7 verses, God says, “I will” 4 times—he’s laying out his plan, his orchestration of Cyrus’ work; he says “I am” 3 times in our reading this morning—revealing to us both directly and indirectly who this God is that we worship.  He says “I have” twice in the same span of verses and in verse 7, declares “I form,” and “I make”—emphasizing what he is already up to through his mighty power and for the sake of His people.

Though the assertions that the Israelite God is not only alive, despite his peoples’ overthrow and exile, but also responsible for the great king Cyrus’ success, is shocking enough, the real exceptional thing about this passage is what we learn about God through it: Everything belongs to God. This Israelite God, is all-powerful, bending the long arc of history toward his own purposes; no one is beyond his reach, nothing is outside of his realm.

We see this same message in Psalm 50, where we started this morning.  Take up your BCP in your pew and turn to page 654—verse 10 tells us, “all the beasts of the forest are mine, the herds in their thousands upon the hills.”  Later in verses 12, “If I were hungry, I would not tell you, for the whole world is mine and all that is in it.”

Everything belongs to God; God never depended upon the ancient Israelites’ blood sacrifices for his nourishment, as verse 13 tells us, “Do you think I eat the flesh of bulls, or drink the blood of goats?”  In 21st century parlance, we might go so far as to interpret this verse in psalm 50 as saying, “Do you think I keep the doors of my temple open only because of your dollar bills?  Are you under the impression that the Gospel is only spread because of your checks?”  My friends, God does not require our money for the fulfillment of his purposes.

Lest anyone stop reading and leave right now, considering this the greatest anti-stewardship sermon of all time, let’s flip over to the Gospel.  Jesus says something convicting to the Pharisees, and something convicting to us: “Render therefore to Caesar the things that are Caesar’s, and to God the things that are God’s.”  Trying to catch Jesus up, some interns of the Pharisees are sent to ask the Teacher whether they really should pay taxes.  The questioners try to butter Jesus up, spitting back at him words they suspect he would say—that Jesus is not particularly interested in giving credit, honor, and glory to people usually given honor in their society.  Surely he wouldn’t say that paying taxes is a good use of money, lining the coffers of the corrupt, oppressive secular government.  Verse 18: having perceived their wickedness, Jesus sighs, “why do you test Me, you hypocrites.”  Then he asks for a denarius, the money required for taxes; on its face is the likeness of Caesar and so Jesus keeps the governor happy by affirming the paying of required taxes.

Jesus turns on his corrupt questioners, though, adding, “Render therefore… to God the things that are God’s.”  Now, we’ve got Andrew Jackson and Abraham Lincoln and Roosevelt and Washington on our currency, but we’ve got the mark of God on each of us.  In the beginning, in Genesis, God breathed the breath of life into the clay person he’d formed out of the earth, and since then, the thing that differentiates us from all other creatures is the Image of God that is stamped on each of us.  It’s what makes us long for something beyond ourselves, it makes us sort of disquiet about the big questions of life in a way that our sweet pets and wildlife and flora have no capacity for wondering or for spiritual connection.  We are made to interact with God, with the all-powerful, uncomprehendably vast, mysterious God who introduces himself to us through Jesus in Scripture, in the Eucharist, and in ministry with each other.

“We offer ourselves, our souls and bodies, to be a reasonable, holy, and living sacrifice to you, O Lord.”

How curious and awesome that this immense being, The Immanent Being, not only desires to be in relationship with us, but at his very core, the Triune God is a relationship.  In response to such love, such an enormous and powerful God who wants nothing more than to be with us always, in our hearts, near our every thought, what can we do but lay down our lives at his feet?  What can we do but open our hands, our storehouses, our bank accounts, our calendars, our very selves, and offer them up to him?  He doesn’t need these things, but he does want us.  He wants to be the center of our hearts, the middle of our focus.

That’s why we have a cross and an altar and a stained glass window of Jesus up front—this God who has interacted with and desired the love of humanity from the beginning is the one toward whom we orient all our lives.  We come to church and literally orient our bodies, and we pray that our souls and lives may be oriented this way, too—toward the living God, the God of Abraham, Isaac, and Jacob, the God of Peter and Paul, the God of the saints throughout the last two thousand years of church history, and the God of you, and me, and the people still in bed right now, and the people on the street.

This is the God to whom we offer our lives in thanks-giving, the one who uses foreign kings for the sake of his own people’s redemption, the one who truly owns every thing which is in existence, the one who came in the form of a baby to an oppressed people in the dark days of the Roman empire, the one who overcomes death itself.

“Offer to God a sacrifice of thanks-giving, and make good your vows to the Most High.”