It almost seems as if I’ve skipped the sermon, doesn’t it?  Breezed over the Creed, the Prayers and the Confession, stolen the celebrant’s line, and moved right on to the offertory. END_OF_DOCUMENT_TOKEN_TO_BE_REPLACED 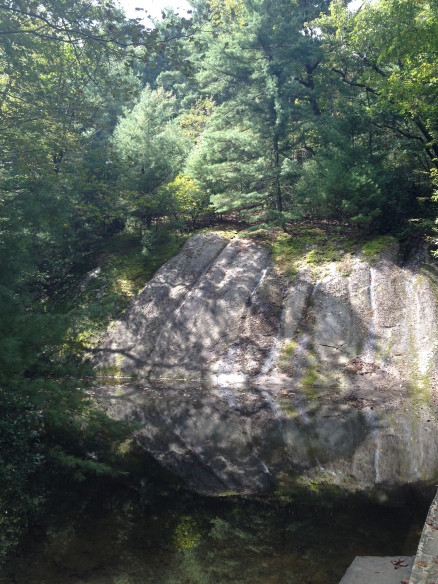 The opposite-ness of this way of like that God calls us to in Advent makes its practice all the more important.  Christians are supposed to things differently and look strange to people who do not claim Jesus as Lord.  So we sit with the prophets, with Micah, and wait for Jesus to come, just like Micah waited for Jesus thousands of years ago.  While we’re sitting together, us and Micah, we might as well read some of what God revealed to him; perhaps we’ll learn a bit more about this strange God and how it is we can practice being still enough to listen to him.

In the study Tuesday morning, I gave some facts about Micah: from the 8th century, called a “minor prophet” because his book is short, prophesied mostly about Jerusalem and Judah.  He’s referred to in Jeremiah, and perhaps in 1 Kings, too.  Jeremiah 26:18-19 gives a window into how we might interpret and understand the prophecies of the Old Testament, especially the woeful ones.  Jeremiah presents one of Micah’s prophecies, that Zion and Jerusalem would be razed if the people of Judah did not turn to God, and then Jeremiah points out that under Hezekiah, a righteous king, Zion and Jerusalem stood strong–it’s not that Micah was wrong, but that the smallest turn toward God changed the course of history.

Though Micah is one of the “minor” prophets, his words are widely used and remembered.  Do you recognize this one, “they shall beat their swords into ploughshares, and their spears into pruning-hooks; nation shall not lift up sword against nation, neither shall they learn war any more.” (4:3b)  The same words are found in Isaiah 2:4; the vivid phrase has inspired many artists over the centuries.  Another well-known verse, 6:8, exhorts: “what does the Lord require of you but to do justice, and to love kindness, and to walk humbly with your God?”  Finally, perhaps Micah’s most famous prophecy, “But you, O Bethlehem of Ephrathah, who are one of the little clans of Judah, from you shall come forth for me one who is to rule in Israel, whose origin is from of old, from ancient days.” (5:2) This prophecy is quoted by Matthew (2:6), as well as being inspiration for “O Little Town of Bethlehem,” the beloved Christmas carol.

The central message of Micah, which we’ll be studying for the next four weeks, preparing for Christmas, is stated in chapter one, verse three: “the Lord is coming.”  Echoed in I Corinthians 16:22 (“Our Lord, come!”) and Revelation 22:20 (Come, Lord Jesus!”), this is our Advent prayer–“Our Master, come to us, help us to receive you.”  This is the human challenge, to receive the God revealed in Jesus Christ, to be turned toward him and to submit ourselves to his call.

Micah speaks often of the coming judgment which will accompany the Messiah; judgment can stir up anxious images of law courts and accusations, but this isn’t what Jesus brings.  “God never accuses, he convicts” (via a very wise friend last week), reminding me that thoughts I have that sounds like accusations are the sort I ought to banish immediately–accusations and shame are not of God, they are not part of God’s judgment.  “God’s justice is forgiveness” (another very wise friend)–holding on to grudges, counting costs, and eating up our resentment brings judgment onto ourselves, our sin is our own punishment.  As God continuing seeks relationship with each of us, may we undertake habits during Advent which help us to be turned toward God.

When you stepped over the threshold of the building you’re sitting in this morning, you left the United States of America.  You left American society.  Be not afraid! (have you heard that one before?)  You see–it’s more that you entered God’s Embassy than that you left American soil, but here, in the church, we are now on God’s turf.  Here, God’s rules carry the day, we are on holy ground that has been consecrated to be the place where we encounter God in the sacraments and are changed by our interaction with the Holy One.  The rules here are different than the ones we often follow outside these doors, the social customs are different here than the ones we’re used to following walking down the streets of Columbia, South Carolina.  These differences aren’t just nuances or quirks–there is significance to the way that God’s kingdom works; it’s sometimes in opposition to the way we’re used to behaving.

Here, in the Bible, we see dozens of accounts that show us the way that God desires for the world to look.  When we read holy Scripture together we learn about God’s kingdom, the world that we step into when we are in this holy place, the world that God desires for all of creation to become.  This morning, we read the story of Naaman, a powerful Syrian who is paradoxically, a sufferer of leprosy.  In the ancient world, leprosy was a disease the counted its victims among the weak, the marginalized; people with leprosy, as we saw in today’s Gospel lesson, were separated from society, ostracized.  Naaman, however, somehow manages to preserve his place of power despite this disease, though he clearly desires very much to be rid of the affliction.  Who is it that notices the skin lesions and suggests where he might seek treatment?  His Israeli slave girl–this nameless girl has a quotation in Holy Scripture, how strange that a being not even considered a real, full person by her society would get a shout out in the Bible.  She says that there’s a prophet in her home country who could definitely cure her master’s ailment.

Naaman goes to this holy man, Elisha, and parks his chariot outside Elisha’s front door.  Naaman clearly expects Elisha to dash out to his driveway and greet his Most Esteemed guest.  Elisha does nothing of the sort–he sends his servant out the front door with a message.  Naaman’s eyebrows raise, verse 11 says that he “became furious”–Elisha, this big-time prophet, was supposed to hurry out to the chariot and wave his hands about and shout in a loud voice.  Look at your Bible, it actually says that!

To add insult to injury, another low-life is now giving Naaman directions…  The messenger tells Naaman that if he will go and wash in the Jordan River seven times, he will become healed of his ailment.  Naaman grumbles.  Not only is the Jordan River a pathetic stream compared to the wide, beautiful rivers of Syria, but what sort of pathetic quest is a bath?  Couldn’t Naaman, the great military general at least prove his strength or daring or mental acuity in order to be healed?

For a third time, a servant corrects Naaman (I’m almost surprised that more slaves and messengers and servants aren’t killed or banished in this story!), saying in verse 13, “Well, sir, if you had been told to do something super impressive, you would have dashed right off to do it.  Why not go do this super easy thing?  We might even get back home in time to catch the end of the football game!”  Naaman takes a deep breath–I think he must be a very patient, and exceptionally magnanimous nobleman of his time–and agrees with the servant.  He makes his way down to the Jordan River, he immerses himself seven times–which is the Biblical number which means “complete” or “total”–and Naaman’s skin is made, it says, “like the flesh of a little child.”  “As smooth as a baby’s bottom,” if you’ll pardon the saying so early in the morning.

Did you catch that?  Naaman is in danger of societal death, perhaps even bodily death, depending on how bad his leprosy was, and Elisha sends him to be baptized in the Jordan River, which heals him.  Naaman, the Syrian, the foreigner, is made healthy and whole again by command of a holy man and the application of a bit of water.

Naaman has borne the insubordination and the humiliation of being directed about by his slave, Elisha’s messenger, and a servant; he has submitted himself to the “easy” task of taking a bath instead of showing his might and earning his reward.  He returns to Elisha–Naaman himself goes up and knocks on the prophet’s front door this time–and says, “Indeed, now I know that there is no God in all the earth, except in Israel; now, therefore, please take a gift from your servant.” (v. 15)  Naaman still wants to make sure he pays his debts and doesn’t leave himself beholden to anyone.  He’s got a reputation to uphold, and he can’t let it get out that he’s dependent on this holy man for his healing.

Elisha can sense when he’s being bought off, and will have nothing of it.  He doesn’t want an offering with psychological strings attached, God’s power is not for sale, and nor is the truth of God’s healing to be silenced with gold.  Naaman has learned–he’s been brought very low throughout this experience, and catches himself where he’s gone wrong.  He changes his request, asking instead that he might have some soil from Elisha in order to build an altar that Naaman himself might use for his worship of the Living God when he goes back to his own land.  I imagine Elisha finally smiled and nodded.

Naaman finally realized what the slave girl and the messenger and the servant had learned long ago because of their necessarily vulnerable place in society: you cannot do anything to insulate yourself from God.  Naaman tries to use his impressive strength and mind, desiring a more demanding cure, and then tries to use his money–all to keep God at arm’s length.  He finally learns that whether he pledges 2% or 55% to God, none of it is close to a repayment of the life that God, through the Jordan River, has given back to Naaman.

What would you pay for your life being saved?  We pay plenty to doctors and car makers and insurers and our government for protection, safety, and insulation from danger or dangerous circumstances.  God, through Jesus Christ, has saved us from eternal death.

Have you come back to Jesus’ feet, glorifying God and praising him with a loud voice?